‘Not suitable’: where to now for James Packer and Crown’s other casinos?

The Inquiry found that Crown Sydney Gaming was “not a suitable person” to operate the Sydney casino. It also found the parent, Crown Resorts Limited, was “not suitable to be a close associate of the licensee”.

After months of hearings, characterised by spectacular admissions including threats of violence, the report of the Bergin Inquiry into the probity of Crown Sydney Gaming, a subsidiary of Crown Resorts Limited, has been tabled in the NSW parliament.

Crown Resorts runs the Crown casinos in Melbourne and Perth.

The Inquiry found that Crown Sydney Gaming was “not a suitable person” to operate the Sydney casino.

It also found the parent, Crown Resorts Limited, was “not suitable to be a close associate of the licensee”.

The serious corporate failures relate to

Other matters relate to “the structures in place that have contributed to the corporate failures” including:

The report says it is clear each director understood as at 2019 that Crown had given an undertaking to the NSW Government and the Authority that it would not allow the late organised crime figure Stanley Ho to acquire a direct, indirect or beneficial interest in Crown. 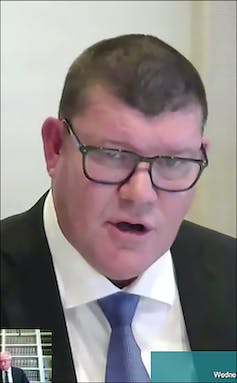 Yet it found the late Mr Ho’s associated entity had an interest in
Melco Resorts & Entertainment to whom Packer agreed to sell his company’s Crown shareholding and “thereby obtained an indirect interest in Crown”.

Speaking ahead of the tabling of the report, NSW Treasurer Victor Dominello said that at the heart of the inquiry was concern over organised crime, money laundering, and gambling.

Commissioner Bergin also recommended that a new Independent Casino Commission with the powers of a standing Royal Commission be given sole authority over licensing and disciplinary issues.

Tabling the report in parliament, and invoking parliamentary privilege, is reportedly intended to circumvent the possibility of defamation action by directors and executives of Crown arising from the report.

No confidence in directors

Ken Barton is the chief executive of Crown Resorts Limited.

He should “conclude his tour of duty as soon as possible”.

in the circumstances of the findings against Mr Barton, Mr Johnston and Mr Demetriou, the Authority would be justified in entertaining very serious doubts that Crown could be converted into a suitable person under the Casino Control Act whilst they remain as directors

Another director, Harold Mitchell, should

The report describes a confused culture within Crown, with some directors and executives more loyal to Mr Packer, who is no longer a director, than the company itself.

The stewardship of long-time Packer associate John Alexander, chairman and chief executive between February 2017 and January 2020, led “to disastrous consequences”.

This included processes that exposed its directors to conflicts of interest and remote management by Mr Packer and a failure to protect Crown’s casino licensees from the infiltration of criminal elements through, at the very least, its lack of robust junket approval processes and a lack of proper oversight and monitoring of risks to money laundering in its subsidiaries’ bank accounts.

Bergin suggests the NSW Casino Control Act be amended to prevent any person from holding more than 10% of any licensee or holding company.

The Independent Liquor & Gaming Authority will consider the report and determine its own path forward.

It’s hard to see how Crown, as currently structured, can open the Sydney casino in the near future.

Read more:
If Crown is unfit to hold a Sydney casino licence, what about Melbourne, and Perth?


Although the Sydney Barangaroo building is complete, gambling facilities have not been permitted to open.

The report raises obvious questions for the Victorian and Western Australian regulators.

To date there has been little to suggest that Victoria’s Commission for Gambling and Liquor Regulation has the wherewithal to take on Crown.

That has to change. As Greens spokesperson on gambling Senator Rachel Siewert said on reading the report, “we need to know what’s going on in Perth and Melbourne”.

This article is republished from The Conversation under a Creative Commons license. Read the original article.